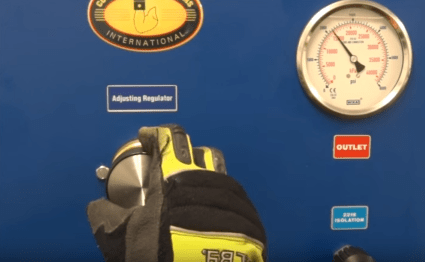 The previous blog entry generated a lot of interest around building your own self-running training aids.  While it may look difficult at first glance, it really isn’t very hard with the right tools.  An example I can show from a few year back is a video I made to teach our firefighters how to use the cascade system at the station to refill bottles.  I used a combination of screen captures from a Powerpoint, along with a step by step video guide.

When it comes to video, I hate hearing my voice in narration (Brent is far better at it, he did our website intro video). And while I have no scientific evidence for it, I find that using the background noise or music can enhance learning.  Background noise is good when you have a subject that you’re teaching that involves ambient sounds, such as a fire pump or other equipment.  The sound it makes can indicate correct or incorrect operation.  Firefighters learn not just by sight but by sound too.  And when the sound is less important, you can throw in a free music track instead. So the subject of the video will generally dictate which approach is better.

This video combines step-by-step instructions as a demonstration and a music track overlay with captions for the instructions.  I used a little bit of Powerpoint and Microsoft Movie Maker to build it.  It took about 6 hours total, including filming.

An important point is to choose captions or narrations – don’t try and make an audience read and listen at the same time, the message will be lost. Keep captions short with simple words and sentences so they can be read and understood quickly and synchronize the caption to the exact spot in the video that it describes.

This video has been accessed over 2000 times within my fire department. Can you imagine the amount of time this has saved the instructor and the student?

LEAVE A REPLY Click here to cancel the reply

This site uses Akismet to reduce spam. Learn how your comment data is processed.